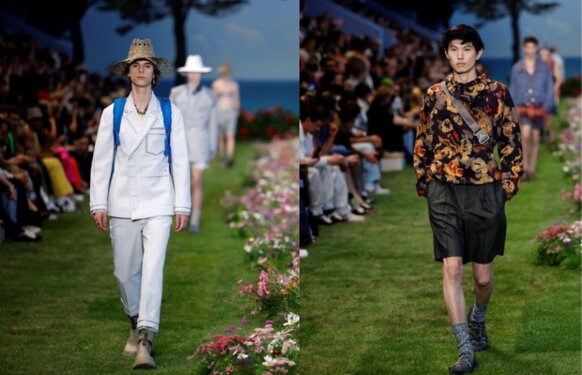 For its most recent menswear collection, aristocratic with a utilitarian flair, Dior moved its audience to a beach garden between Normandy and Sussex on Friday. 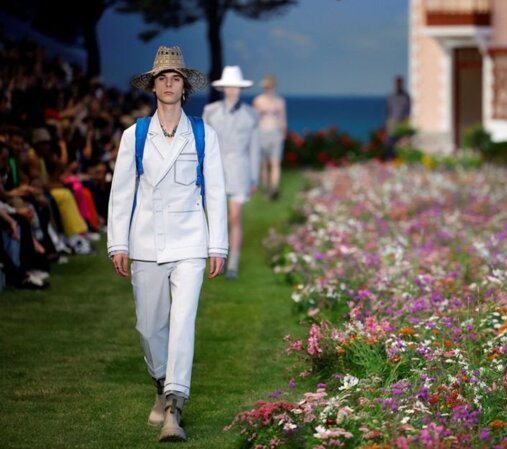 For the show during Men’s Fashion Week, Kim Jones, artistic director of Dior menswear, set up the runway in a temporary location in the heart of Paris. With a blue-sky painted panorama and a life-size replica of Christian Dior’s pink mansion in Normandy, the runway was changed into a lawn of purple, orange, and pink flowers.

It was surrounded by a replica of a country house that the Bloomsbury Group, a group of British authors, thinkers, and painters active in the early 20th century and frequently recognised as an influence by Jones, used to frequent. 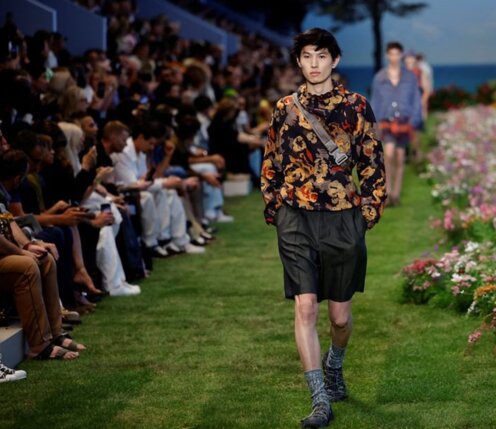 The first model opened the show wearing a monochromatic ensemble that combined an extremely sporty rucksack with a beige suit, showcasing Jones’ penchant for fusing streetwear with immaculate tailoring.

Others followed in light blue deconstructed gardening attire, double-breasted jackets worn with pleated Bermuda shorts or wide-leg pants, as well as other outfits. On knit sweaters and technical materials, Duncan Grant’s paintings from the Bloomsbury School were replicated.

Some models wore cannage hats, which feature an openwork grid design popularised by Christian Dior and can also be seen on padded long coats in blue and khaki green, more for fashion than sun protection. Neelum Muneer decided to go all black in her recent post, setting our insta feeds on fire. An all-black look is timeless, simple, and elegant and we can’t deny the class it gives to us. Black makes everyone look elegant but when Neelam wears it it’s something extraordinary making it impossible to take your eyes… Aiman Khan posted a new photo announcing the launch of Aimanminal closet new collection, looking chic and elegant. Aiman Khan took Instagram to announce the new collection of her brand which is chic casual wear. The outfit Aiman Khan is wearing is “Bella” which has scalloped slits and scalloped straight pants in black and white… 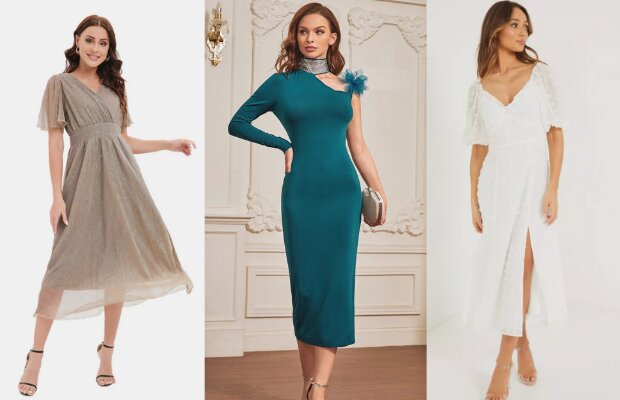 Festival De Cannes is an event that celebrates films produced across the world. Celebrities from all over the world participate in this event. You may call it one of the most epic star studded events of the year. What’s the best thing about the event? The fashion. My my the outfits are truly breathtaking and… Women never complete their shopping so easily and choosing the right outfit is extremely difficult for themselves. When events come in extreme seasons such as in hot summer, the difficulty increases further as they want something calm and comfortable. Extreme weather burdened them for adopting the fashion. Sapphire presents a solution to this problem by… Ayeza Khan always remains active on social media posting her new looks daily and people admire her fashion statement. The fans who follow her get a treat of new fashion updates and new ideas to refresh their wardrobes. Ayeza Khan posted photos looking ravishing in the pink festive collection by Saadia Asad and this velvet…